What Is A
Dead Tooth?

What is a dead tooth?

How would you know if you have a dead tooth? Does it hurt? Does it look different? Does it smell bad? The short answer is - it all depends.

A tooth that has died does NOT have a healthy, live nerve inside it. The nerve has died. Normally teeth DO have a nerve inside them. It's what tells you if your coffee is hot or your ice cream is cold. A tooth nerve also has tiny blood vessels inside it. 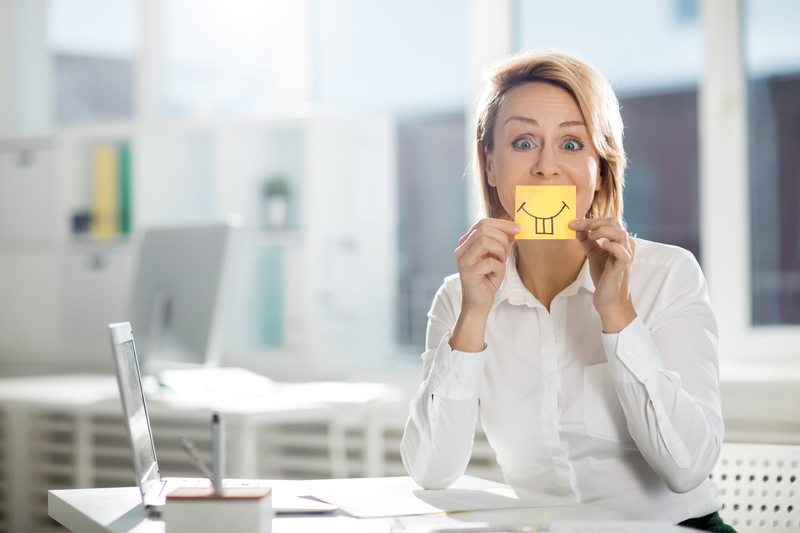 Are YOU hiding a dead tooth?

The blood supply to a tooth nerve is extremely important, if the nerve is going to stay alive. More about this in a minute . . . But first . . .

I usually tell my patients that a tooth is a bit like a pencil. The nerve inside the tooth is like the pencil lead, running down the inside of the tooth.

It's possible for the nerve to die and shrivel up. This is then like a pencil with the pencil lead taken out, and a small space is left behind.

What is a dead tooth?

Soon after a tooth dies, you cannot see any difference. It looks like any other tooth. But after a period of time, sometimes years, the tooth will start to get darker.

In the photo below you can see TWO dead teeth. One is almost BLACK, and has been dead for several years. The other tooth is not as black, but still very discolored - sort of grey-brown. 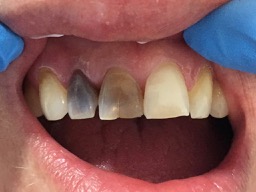 This darkening is caused by the tiny blood vessels in the nerve breaking down and leaking red blood cells. These red blood cells break down and release the iron elements inside. It's very like a normal bruise that you get when you hit your leg against a chair, for example.

But with a tooth, the discoloration gradually gets darker, and darker, as time goes by. It just continues to get darker, until you have a BLACK tooth. And it's permanent. The tooth never gets lighter again on it's own.

What causes the nerve to die? It's usually caused by the bacteria in tooth decay. Sometimes it can be caused by a knock or a blow to a tooth, say from a bike accident, an automobile accident, or being hit accidently in the mouth, maybe with a baseball bat.

Rarely, it's from the stress and wear due to grinding your teeth when you're asleep. I say rarely, but it DOES happen.

You might think that not having a nerve in a tooth would be OK, because then you can't get toothache. Well, it's true that the tooth itself cannot sense hot and cold anymore, but there is a problem with the little space left behind in the middle of the tooth.

That empty space where the nerve used to be, now has dead tissue in it. This dead nerve tissue can provide a feast for bacteria, eventually leading to an infection within the tooth, and this infection can then leak out of the tip of the root.

What Is A Dead Tooth?

A dead tooth that has not been treated will eventually lead to a Tooth Infection. 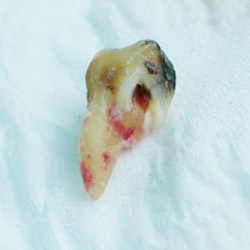 Why do teeth have nerves in the first place?

To be honest, we don't know for sure. You'll have to ask the Creator about that! As a tooth is developing under the gum, it is actually the nerve tissue buried in the middle of the tooth that is laying down some of the "new tooth" substance, from the inside.

Once the tooth is fully formed, the nerve is pretty much redundant! But it remains in the middle of the tooth, sensing heat and cold. It can also tell you if you have a crack in your tooth.

Here is a photograph of a tooth nerve taken out of a front tooth; the RED end is still alive, and was causing severe toothache. The other end, which is pale and barely visible, is the DEAD end. About halfway up the nerve you can see the color change from red to white. That is the transition zone, where the healthy nerve is dying. 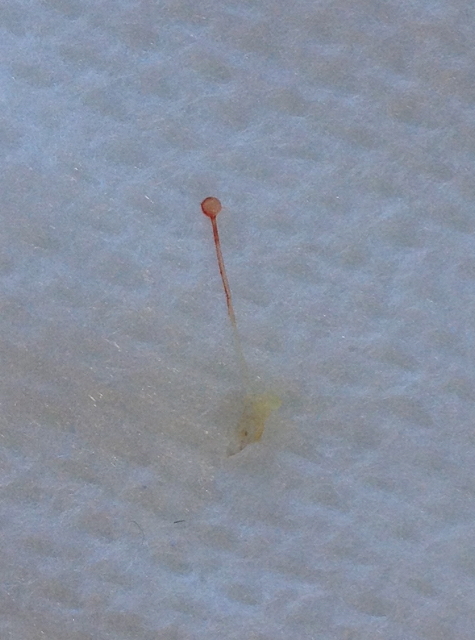 This section of dying nerve is what causes the INTENSE pain of toothache when a nerve is dying. This nerve death process gradually travels up the entire nerve, until everything is dead. AND IT HURTS!

What Is a Dead Tooth?

Why does a tooth die? There are several possibilities;

1. The tooth gets knocked. If the blow is severe enough, the tiny blood vessels at the tip of the root can get squashed, or ripped. This can reduce the blood supply to the nerve inside the tooth root. Or even cut off the blood supply completely.

Without a proper blood supply, the tooth nerve will start to die. Unfortunately, once this process starts, it cannot be stopped or reversed. Sometimes the tooth will become very painful as the nerve dies. This is called pulpitis. Sometimes (rarely), the nerve can die quietly, without you feeling anything. So you don't know that anything has happened - until the following infection becomes an abscess.

2. Decay. If a tooth gets a cavity and decays, then bacteria in the decay will start to irritate the nerve, causing Tooth Nerve Pain. If you let this go untreated, the bacteria will eventually reach the nerve. The nerve becomes infected. Then it will start to die.

As with a knock or a blow on the tooth, once the nerve starts to die, it cannot be stopped or reversed. The nerve will die completely. Again, you will normally get a lot of toothache while this is happening, although sometimes the nerve can die without causing any pain.

3. Many years of heavy use. Sometimes a tooth can die if it takes a lot of the "weight" of your bite. Many people clench their teeth at night when they are asleep. They grind their teeth down flat.

This can put a very heavy load on one or two teeth. The tiny blood vessels at the tip of the root become compressed, reducing the blood supply to the nerve. If this happens very often (ie. every night), and severely enough, the nerve will eventually die.

What Is a Dead Tooth?

So when the tooth is dead, there's no more pain?

Well, at some point the nerve finally dies completely, and when this happens then your toothache is gone. For a while.

Because NOW you have a tooth with a dead nerve inside it. Imagine you got severe frostbite on one of your toes. The blood supply is cut off. The toe dies. Just like your tooth nerve. But what happens then? Does your toe just stay the same?

No, the dead toe starts to rot. Bacteria can breed in there, because there is no blood supply and therefore no immune system. The same thing happens to a dead tooth nerve. It starts to rot, and becomes infected.

Then this infection starts to leak out of the tip of the root. The bone around the tooth root becomes infected, too. This is the START of an abscess. At first, the tooth will become tender to bite on. Then it will start to ache all the time. At this point you will need Tooth Abscess Treatment.

The period of time that you have between the tooth dying and the abscess starting can vary a lot. Sometimes it will be a matter of days, and at the other extreme it could be several years! 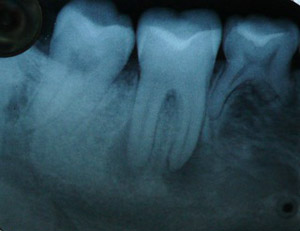 a dead molar with infection on the root tips

On the right hand side of the image is a smaller tooth - that is a baby molar! So we know that this patient is under 10 years of age.

Once a dead tooth has become dark, it MAY be possible to lighten the color of the tooth with tooth whitening procedures, after a root canal procedure has been completed.

What is the treatment for a dead tooth?

There are only 2 treatments for a dead tooth.

If root canal treatment is done SOON after the tooth dies, it usually prevents the tooth from becoming darker. It is also sometimes possible to lighten a tooth that has become slightly darker by using a bleaching technique, as mentioned above.

This usually gets the tooth a lot lighter in color, but it may not match your other teeth exactly. Another method is to put a crown (also sometimes called a "cap") or veneer over the tooth, to hide the dark color.

What Is A Dead Tooth?

You may have heard your dentist use the words "vital tooth" OR "non-vital tooth". It doesn't mean what you think. To be honest, these phrases are ingrained into dentist's brains at dental school, and we forget what they sound like to normal folk!

To a dentist, a "vital" tooth is a tooth with a healthy nerve inside it.

A "non-vital" tooth is a tooth that does NOT have a nerve inside it.

The word "vital" is being used in a similar way to "vitality", meaning life, being alive, or full of energy. It has nothing to do with being an important tooth!

ALL teeth are important! The phrase "non-vital" just means that the tooth doesn't have a nerve. It may have already had a root canal treatment and be perfectly OK.

OR it might be a tooth with an untreated dead nerve. If you think you have a dead tooth, get your dentist to check it out. Getting it treated sooner rather than later will help prevent it going dark, and also prevent an infection and abscess later on. Much better!

I hope my guide to a dead tooth has been helpful.